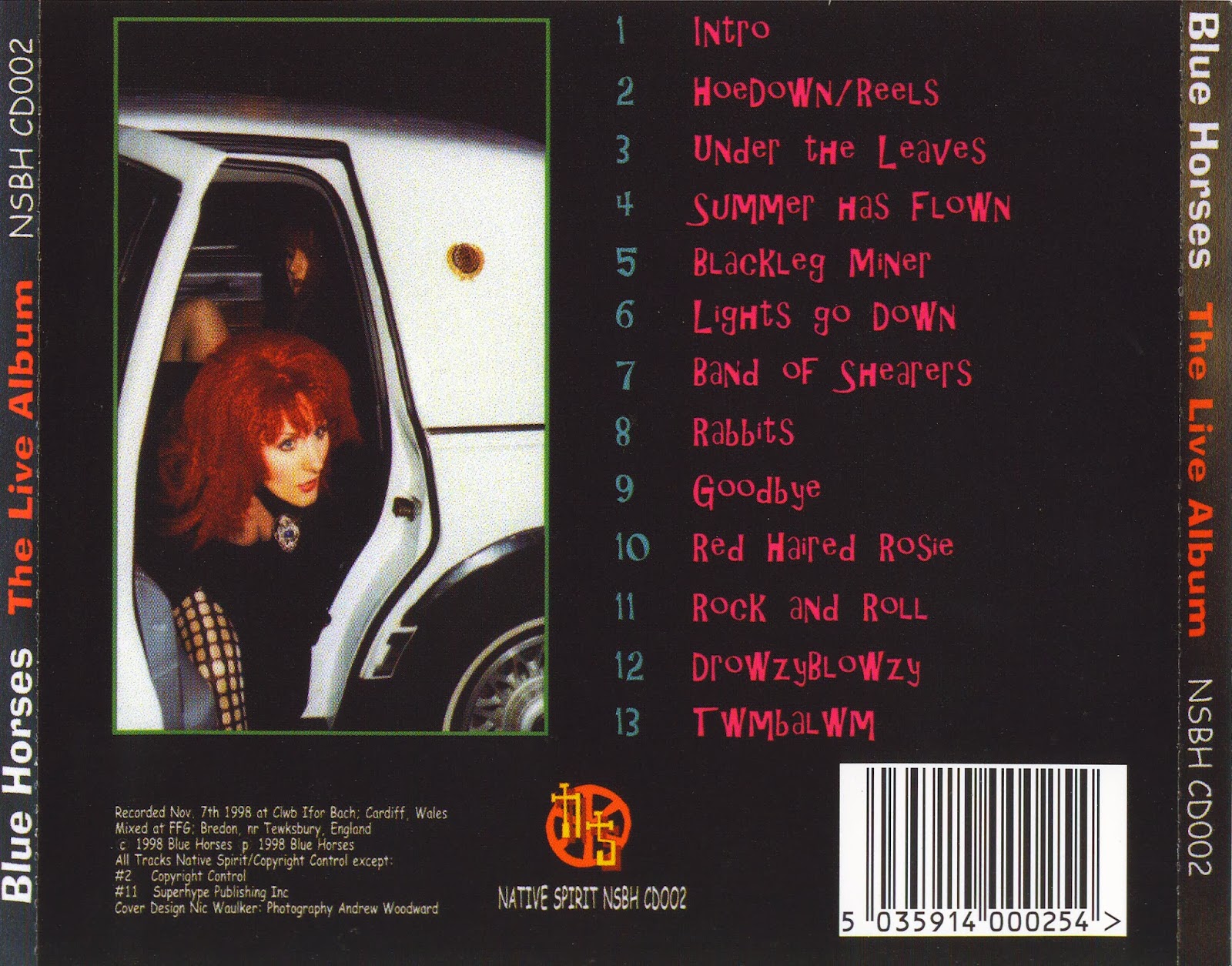 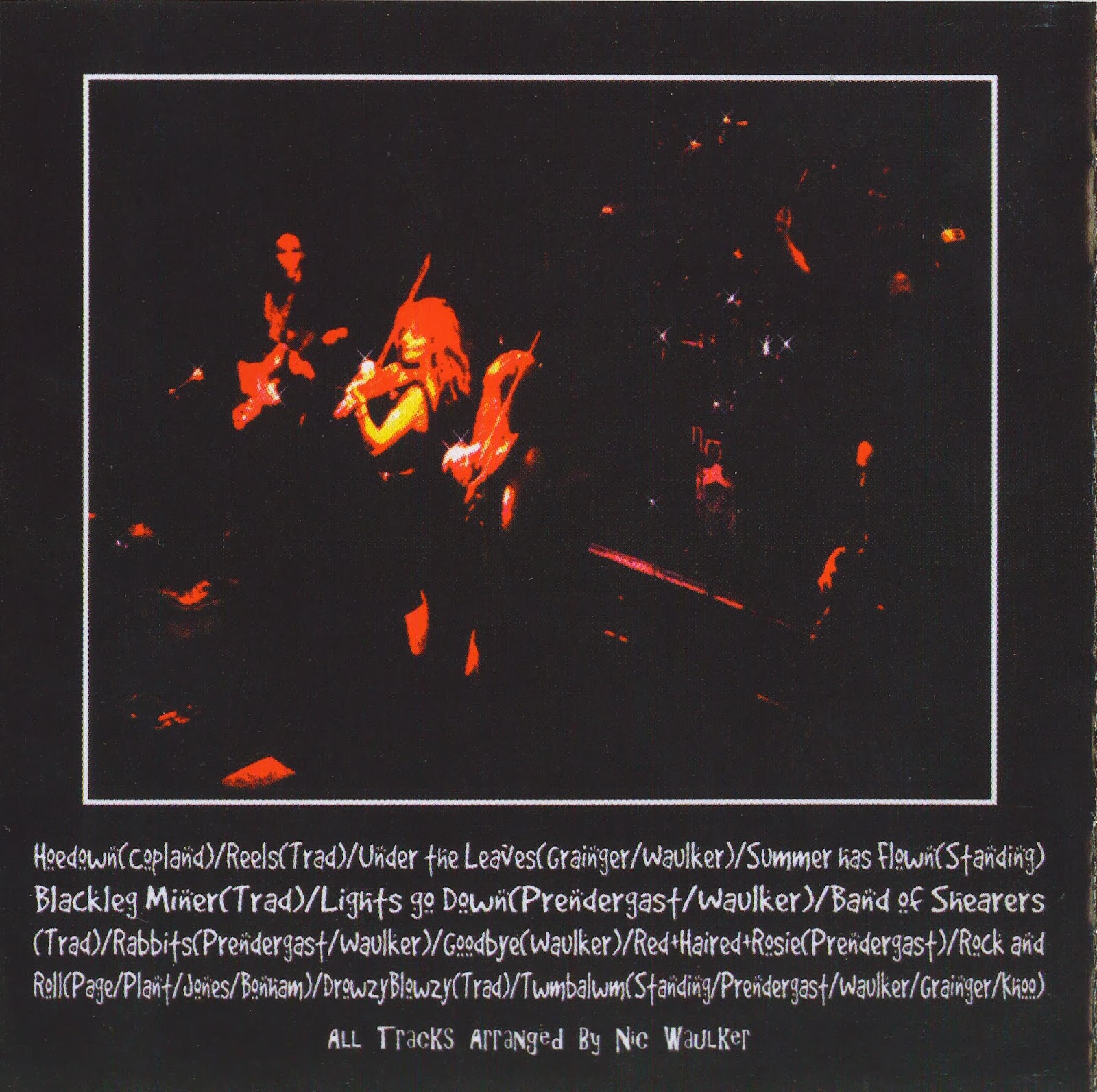 November 7th 1998 - Wales.
Cardiff's legendary Clwb Ifor Bach and here we all are again for the annual Bluehorses Birthday bash, playing our swaggering brand of rifftastic roots rock to a sell out audience from the far corners of the UK, Belgium, Scandinavia, and Holland!
This album represents an hour of the finest tracks, most of which are previously un-recorded including half a dozen new songs, a storming version of Copelands Hoedown (interlaced with a couple of reels from Ireland and Eastern Europe which we got from Scottish band Burach); a very rocking take of "Cracking Leather" album favourite Under the Leaves; and some real crowd pleasers from the live set of the past year or two including Led-Zeps Rock 'n Roll and the infectious, improvised dance mayhem of Twmbarlwm, named after a hilltop burial-mound 'twixt Cardiff and Newport that Mart has always known as Sunday afternoon walk from his childhood home in Cwmbran, but Liz and Nic recently discovered as a mysterious remote site only accessible by climbing a darkly forested valley-side (apparently known in these parts as the other side of the hill).
There's too , our first ever recording of The band of Shearers - well known to our fans as the Welshman's-Best-Friend-Song (in actual fact a traditional Scottish Getting-in-the Harvest song, no sheep connection whatsoever. Sorry for the bum-steer guys, but it has given you something to shout all this time!) .Summer has Flown is Mart's first BH composition, writ on the way to the Dranouter Festival in Belgium - it did happen to be in the middle of a heatwave, but then he is well known for being a bit premature.....
So that just leaves me room to say: Thanks for your support, especially to everyone involved in or at the making of this recording and keep a lookout for the Video!

fFroots
"They're currently working on a brand new studio album that should be with us in good time for the millennium, but this confirms that those of us who started foaming at the mouth in excitement after hearing their audacious debut Cracking Leather, Skin and Bone weren't entirely off our trolleys...
Rapidly being seen as folk-rocks' last great hope, the strength of their conviction alone is pretty irresistible and energy levels are dizzying behind the determined twin fiddle offensive of Liz Prendergast and EmGrainger... Blazing bursts of reels, snatches of classical interludes and lots of convincing hollering..."
Colin Irwin

Rock 'n' Reel
"Dodgy things, Live Albums, but to their enormous credit, BLUEHORSES pull it off in style... The past couple of years spent largely on the road has certainly finely honed their live act and their reputation as the most exciting live band on the circuit does come across here...
From their opening workout of Aaron Coplands 'Hoedown' to the final burst of Twmbalwm', the energy is palpable. One of the best live albums and does manage to convey the energy and excitement of the live experience"
Dave Haslam

The Live Album
The live album, excellently recorded, conveys immaculately, what must be the sheer power, passion and excitement that is a Bluehorses concert, opening with a rendition of Emerson, Lake & Palmer’s ‘Hoedown’ that would give the prog-rockers more than a run for their money as violins fly and guitar churns, all driven by the solid rhythm section, as lively and entertaining an opener as they come.
From here on in, it’s a wild ride through some sensational live folk-rock, full of anthems, ballads, jigs, rockers and hooks, that really comes alive and makes you want to see this lot in concert, right here and right now.
AG
Back to Discography Page