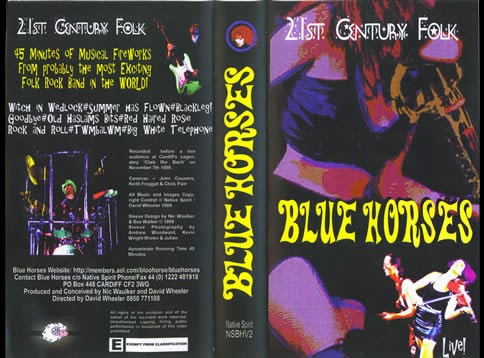 21st Century Folk
45 minutes of musical firewporks from probably the most exciting folk rock band in the world!
Recorded before a live audience at Cardiff's legendary 'Clwb Ifor Bach' on 7th November 1998.

Rock'n'Reel... (EXCERPT)
Tremendous! An almost indecently brilliant showcase for what is "almost certainly the most exciting folk-rock band in the world". There, I've said it. They look great, they sound great, they play with obvious complete involvement and a headlong thrust that must by now be the envy of the land.
Dave Kidman

Folk on Tap... Spins
If music, as the good sage once said, aspires to be an inarticulate speech of the heart, BLUE HORSES are certainly lucid.
"21st Century Folk [Native Spirit NSBHV2 - 45mins] filmed live at Cardiff's Clwb Ifor Bach, includes 10 tracks, many previously unreleased and several not featured on their recent companion "The Live Album" CD.
The rising stars of Welsh folk-rock present another punchy set of songs and put their all into crafting an exquisite, electrical performance. They are gifted and sensitive musicians, and the graceful arcs of violins add to the beguiling sound.
There's nothing one-dimensional about their music and this set captures a late-nite, neon, big city vibe. Don't be too surprised if you experience the odd bout of trouser turbulence in response.
Geoff Wall
Back to Discography Page